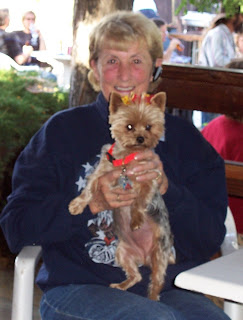 Greeley, CO - Jerre Fisher is one of the most amazing individuals that I have come across since founding Denkai Animal Sanctuary. Aside of caring for her own wonderful bunch of animals, Jerre reached above and beyond the call of duty for Denkai's Sanctuary animals and most recently the arabian horses in need.

On February 20, 2009 Jerre lost a very long battle with Cancer and still in those moments prior to her passing strongly advocated that her animal companions be taken care of.

In Memory of Jerre Fisher; Denkai has Established the Jerre Fisher Memorial Fund to carry on her heartfelt work on behalf of animals in need.

Contributions toward this fund will help to establish a much needed veterinary facility at Denkai Animal Sanctuary and will help to provide emergency care to homeless animals who would otherwise perish.

Jerre Lee Fisher, loving grandmother, mother and wife, passed away Feb. 20, 2009, at Hospice and Palliative Care of Northern Colorado after a long and brave battle with breast cancer.

She was born Aug. 4, 1936, in Long Beach, Calif., to Arthur and Florence (Chamberlain) Frederiksen. She grew up in Greeley and graduated from Greeley High in 1954, excelling in band as majorette, Pep Club, athletics and a member of National Honor Society. In 1965, she married Charles Largent. They later divorced but remained good friends. She married Errol Fisher in 1998. Jerre retired from the State of Colorado 19th Judicial District in 1998 after 29 years.

She loved taking care of her many animals, especially her inseparable chemo companion yorkie, Amazing Grace. She lived and loved life to the fullest and enjoyed Dixieland and Queen City Jazz, cruising to Alaska and the Caribbean and Harley trips to California Highway 1 with her husband, Errol and her brother, Doug. Jerre was past director of the Weld County Humane Society and was instrumental in the early development of the organization as a safe and humane shelter for homeless animals. She was a member of the Greeley/Evans Moose Lodge No. 909, a longtime member of the Greeley Harley Owners Group No. 1462 and editor of the H.O.G. Herald newsletter. She was an avid supporter of many needy groups, including Denkai Animal Sanctuary, American Humane Association, Triangle Cross Ranch and Relay for Life. In her spare time, she crocheted dozens of baby blankets and hats and donated them to the Monfort Birthing Center at N.C.M.C. Jerre enjoyed sharing her many artistic and creative talents, including sewing, drawing, calligraphy and flower gardening.

She was preceded in death by her son, Scott Largent; her brother, Doug; and her parents.
Posted by Floss & Volunteers at 4:57 PM

Floss & Volunteers
Denkai Sanctuary, Colorado, was founded by Floss Blackburn, a lifelong lover of animals and believer in the humane treatment of animals. Floss has over 16 years of experience working with and observing both domestic and wild animals in her native Colorado. This has allowed her to develop strong skills in her own life pertaining to treatment of animals as well as outdoor survival skills and working with at-risk as well as mentally and physically challenged children and adults.